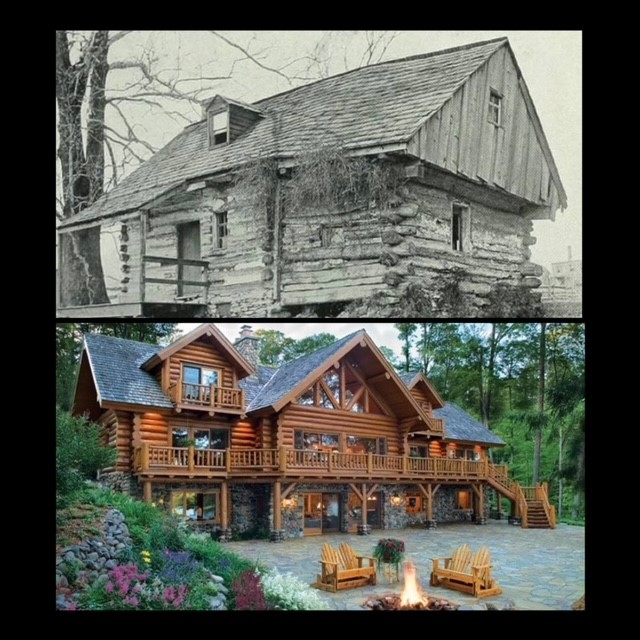 Today, the possibilities when deciding what type of home you’d like to live in are absolutely endless. Architecture and design continues to evolve and change in new ways, leaving many ways to build a home. With all of the new, ever changing home designs there are some designs that are timeless, one of those timeless designs is the design of a log home.

There are so many options when it comes to building and living in a log home, but they all share the same fundamental log structure that we have loved for many years, despite the fact that log homes were originally meant to be temporary homes.

Log cabins have been used as an architectural design in many European countries such as Sweden and Finland for thousands and thousands of years. In America, the first log cabins were built mainly between the late 1600’s and early 1900’s . The cabins were the chosen home design for pioneers and settlers when the New World was expanding to what we now know as the United States. It is said that the first style of log cabins built in the United States were built by settlers from Sweden, near Virginia, Maryland and Delaware.

Log homes have come a long way considering the first home on record was said to be made from cut trees formed together into a square and stacked on top of each other. As settlers came to America, there was little cash to be had, therefore homes and shelter needed to be made from materials that were had on hand or at least easily accessible. These homes were actually made originally to provide temporary living quarters with the intention to build a timber board home once the family had created more of a living with income from crops and harvest. Pine and Spruce were often the trees that were used in the first log homes, because they generally were available in large quantities throughout the forests. Trees such as cedar, redwood, and fir were also sometimes used and still used today.  While running for president, Henry Harrison was actually mocked by his opponents for living in a log cabin. He didn’t mind and embraced the fact that he lived in a log cabin by having his supporters march with banners depicting log cabins.

Fast forward around a 100 years or so into the late 20th century and Americans began to realize life is moving fast, and with technology rapidly growing people rarely take the time to slow down. Modern day working people began longing for the simple lifestyle that a log cabin can provide. Log homes began to make a very sought after second home, or vacation home for many people and families. A place where families could go to escape the hustle and bustle of all that surrounds normal day to day to life. A log cabin’s cozy atmosphere provides the possibility for closer connections with ones self and loved ones. If we fast forward even further to the present day, more and more people are deciding each year to make log home living very permanent. With log cabins becoming a more permanent residence the design ideas for log homes have exploded. Despite many log homes being far from “Simple” these days, they still have the cozy feel and simplistic touch, but with a modern day beautiful twist. As for homes, a log cabin really can give you the best of both worlds.

Learn the 5 Log Home Mistakes You Don’t Want to Make!